Glenn Mistich vs Bryan Butler
Saturday, May 28. The Foundry, New Orleans
Bryan Butler
Salt & Time Salumi, Niederwald, Texas
Bryan is a child of rural America; born and raised in Waco Texas by a paperhanger and a seamstress. He has always had a passion for food. Growing up he spent much of his time in his family’s kitchens. Bryan could have easily followed this passion into a career as a cook or chef, but involvement in his high school FFA program drew him towards a different path. Bryan learned animal husbandry, breed judging and standards by caring and handling show animals. Bryan earned his associates degree in meat fabrication and market management in 1996 from Texas State Technical College.
Bryan’s first job as a butcher was at a small Mom and Pop shop in Waco. After moving to Austin, he began working in a market with some very seasoned butchers, and continued his apprenticeship to becoming a journeyman cutter. Working with a older generation of butchers from another era was a blessing for Bryan. For the last 10 years of his career, Bryan has been the neighborhood butcher in Austin. First working for Fresh 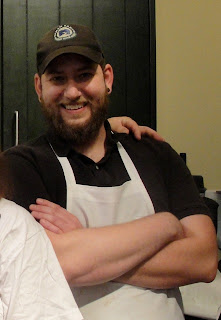 Plus Grocery Stores and then later at Wheatsville Food Co-op where he had his first opportunity to run his own department. This was a defining moment for Bryan, being able to work hand in hand with local ranchers and producers allowed him to support his community and sustainable agriculture in central Texas. Bryan was able to link responsible customers with local ranchers raising fine grass-fed and pastured meats. In his own words “It was a chance to work in and have a positive impact in the meat industry. To sell food free of antibiotics and hormones, raised by real people and not factories”.
Recently Bryan has joined Salt and Time Salumi as partner and master butcher. Salt & Time is the first artisan producer of European style dry cured meats in Texas and is in the process of opening a butcher shop and delicatessen. Salt an Time sources its meats from local farmers, continuing Bryan’s history of support. In 2010, Bryan took a master butcher class taught by Christoph Weisner, President of the Austrian Mangalitza Breeders Association. Bryan considers Christoph to be a mentor. The class covered the art of seam butchery, a traditional form of butchery typically only found in Europe, and especially useful when preparing meat for dry curing. Bryan immediately absorbed this technique and deftly applies it to produce exceptional dry-cured meats.
Bryan’s career has spanned high production retail markets, to “swinging meat” full service meat counters, and now a much slower paced world of dry-cured meats.
Glenn Mistich
The Gourmet Butcher Block Gretna, Louisiana
Gourmet Butcher Block is a Cajun specialty meat market established in 1994. The owners are Leah Hebert Mistich and Glenn Mistich. Leah was raised in the food industry as a little girl. Her parents opened a restaurant, Soop’s,in Maurice, LA, established in 1974, where they started serving 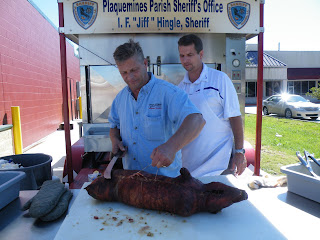