Two Seasoned Butchers Face Off in the Mile High City
April 3rd, The Ritz-Carlton Denver
Jimmy Cross vs. Chris Fuller
Newman Farm Bershire Pig
Chris Fuller
Sunnyside Meats, Durango
Chris Fuller was born and raised in Stamford, CT. During the summers of his high school years he catered top end events in Fairfield County. These experiences formed a respect for the food one serves.
After graduating high school Chris went on to study Culinary Arts, earning an Associate’s Degree from Johnson and Wales University as part of the first graduating class of JWU’s Denver branch. During his education at JWU Chris worked in a variety of foodservice operations ranging from the fine European cuisine of Café des Artistes in Manhattan, to the more casual menu style of The Restaurant in Rowayton, CT. 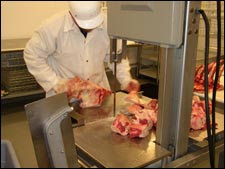 Chris’s quest for culinary knowledge continued after graduating Johnson & Wales and Chris went on to earn his Bachelor’s Degree in Anthropology from FLC in 2007. During his time in Durango he focused his studies on the relationship between agricultural producers and food purchasers (specifically restaurants) in the Durango area.
After a brief time living in Tahoe City, CA and working with Slow Food Lake Tahoe Chris moved back to Durango to become the Plant Manager at Sunnyside Meats, Inc. – a small, federally inspected meat processing plant. Sunnyside Meats was opened in 2002 to counter the “Big Boy’s” domination in the US and bring a viable food system back to life in Southwest Colorado.
Helping small producers in Southwest Colorado to become viable in our regional food market is not only Chris’s job, but his passion as well.
Sunnyside Meats, inc.
253 Country Road 216.
Durango, CO 81303
http://www.sunnysidemeats.com/producers.htm
Watch Chris Cut:
http://www.youtube.com/watch?v=BjLIP8ImEUs
vs.
Jimmy Cross
Marczyk Fine Foods, Denver
Jimmy Cross, head butcher, aka Jimmy the Butcher.
Jimmy is absolutely the real deal. He can take apart a whole pig, which he has done on many occasions, in no time flat. He knows every little weird cut of meat: caul fat, the cap, shanks, skirt, innards. He carries a scabbard with his knives in it that is straight out of Mad Max.

A Denver native, he was doing construction in high school until he realized he didn’t want to do construction. He was hired at a local market as counter help right around Christmas. He was a hunter all his life, and unlike the rest of the holiday counter help actually knew what was what from breaking down the elk and deer he had shot. He avoided the after-holiday ax by learning how to cut meat: started with sausage making, and when he learned that in just one month he knew he had a new vocation.
He has worked at Marczyk Fine Foods for 9 years. Jimmy is married with 2 children of his own. Every Sunday night they have a “Sunday night roast”.
Interesting fact: he can pick a lock with his butcher knives. I never asked where he picked up that skill…
Marczyk Fine Foods
Denver, CO 303 894-9499
http://www.marczykfinefoods.com/
Watch Jimmy cut:
http://www.youtube.com/watch?v=BjLIP8ImEUs