Chicago, March 20th, Two life long butchers from meat cutting families compete at the Cochon555 pig cutting competition. Both butchers grew up in the trade and learned their craft from their family. We are extremely honored to bring them to Chicago for all to witness their skills.
Sam Clark vs. Ricardo Berkbilger.
Sam Clark
‘Sam the Butcher’

Sam Clark started out on a small livestock farm in Southern Illinois. He and his family raised and butchered their own livestock. The first animal Sam ever butchered was a Hampshire hog at age 9.
Sam started working as a meat cutter at age 18 in a small grocery store.
Sam is currently working as a butcher at Papineau Locker in Papineau , IL and has been there for eight years . He processes livestock from the kill floor all the way to cutting down and wrapping.
Sam is skilled at butchering hooved livestock including cattle, goats, sheep and hogs. Cattle are Sam’s favorite livestock to processes. His favorite knife is a 6” curved boning knife.
Sam has also done private events in Chicago land – demonstrating to Chefs and Farmers the art of butchering live to plate.
Sam has become a very successful and distinguished butcher with the support of his wife of 15 years, Becky, and their two sons Tyler (8) and Clayton (6).
vs.
Ricardo Berkbigler

Raised on a family farm in Perryville, Missouri Ricardo grew up close to the land and the livestock his family raised. The family farm supported beef and poultry. He first began to cut meat at the age of 16 in the small local grocery. Since that time Ricardo has worked in meat cutting in various supermarkets in the area.
He has been a part of Fruitland American Meat in Jackson, Missouri for seventeen years. Fruitland American Meat is an established USDA plant of the older model where they receive animals for harvest, fabricate for retail and wholesale and even do further processing and make products in the smokehouse using old German recipes. The facility also operates on site a local meat shop with a full service case which Ricardo helps to manage. Currently, the facility is changing from the commodity market and specializing in processing grassfed beef and heritage pork. Ricardo is the primary butcher for pork and at the same time contributes to beef fabrication.
Ricardo is married to Jackie and has one son, Trystn (age 11).
Patricia Whisnant, DVM
Rain Crow Ranch
American Grassfed Beef
Fruitland American Meat
American Pasture Pork
www.americangrassfedbeef.com
www.fruitlandamericanmeat.com
Farm: 573-996-5333
Plant: 573-243-3107 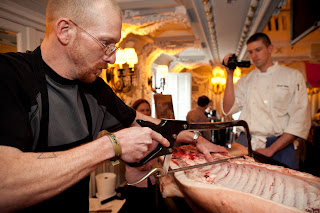